About two-thirds of Jews today – or about 10 million people – are Ashkenazi, referring to a recent origin from Eastern and Central Europe. They reside mostly in the United States and Israel. Ashkenazi Jews carry a particularly high burden of disease-causing genetic mutations, such as those in the BRCA1 gene associated with an increased risk of breast and ovarian cancer.

This genetic burden suggests that the population was shaped by what geneticists call a founder event or a bottleneck. In other words, a small number of foremothers and forefathers contributed much of the modern gene pool. As the population grew and the descendants of these founders had many children, disease mutations that were carried by the few founders became widespread.

One of the most striking features of Ashkenazi Jews today is how genetically homogeneous they are, with almost no discernable differences in ancestry between Ashkenazi Jews across the world. Were Ashkenazi Jews equally similar to each other in the past? What were their origins? To what extent was the gene pool shaped by intermarriage with non-Jews?

New technology has made it practical to economically sequence whole genomes from skeletal remains. We and 30 colleagues mostly from Israel, Germany and the U.S. investigated these questions by sequencing the centuries-old remains of Ashkenazi Jews from the medieval Jewish community of Erfurt, Germany.

Sequencing DNA from a medieval cemetery

Previous studies of genomes of Ashkenazi Jews living today made it clear that the founder event occurred in medieval times. But the earlier geographic origins of the Ashkenazi ancestors are poorly understood.

The first historical records of Ashkenazi Jews are from the Rhineland in Western Germany in the 10th century. In the hundreds of years that followed, an increasing proportion lived in Eastern Europe. Despite periodic persecution, the number of Ashkenazi Jews grew and peaked at more than 10 million in the mid-20th century, before about six million Jews were murdered in the Holocaust.

The medieval Ashkenazi Jewish community of Erfurt, Germany existed between the late 11th century and the mid-15th century. After a gap following a 1349 massacre, the Erfurt Jewish community became one of the largest in Germany – in fact, one of the oldest intact Jewish synagogues in Central Europe is in Erfurt – but Jews were expelled in 1454. After that, the city built a granary on top of the Jewish cemetery.

In 2013, the granary was converted into a parking garage. Prior to construction, the state led a rescue excavation that uncovered 47 graves, most of which we sampled for DNA before the skeletons were reburied in the 19th-century Jewish cemetery. 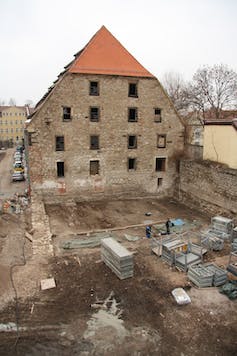 Image: Archaeologists worked to recover medieval remains from a graveyard. The granary building is in the background. Thuringian State Office for Heritage Management and Archaeology/Martin Sowa, CC BY-ND

Our study required review from the local Jewish community, because traditional Jewish law prohibits disturbing the dead under most circumstances. But recent rabbinical scholarship suggested that ancient DNA research is permissible if scientists use loose teeth from already excavated remains. We followed this approach with the aim of being sensitive to community perspectives. 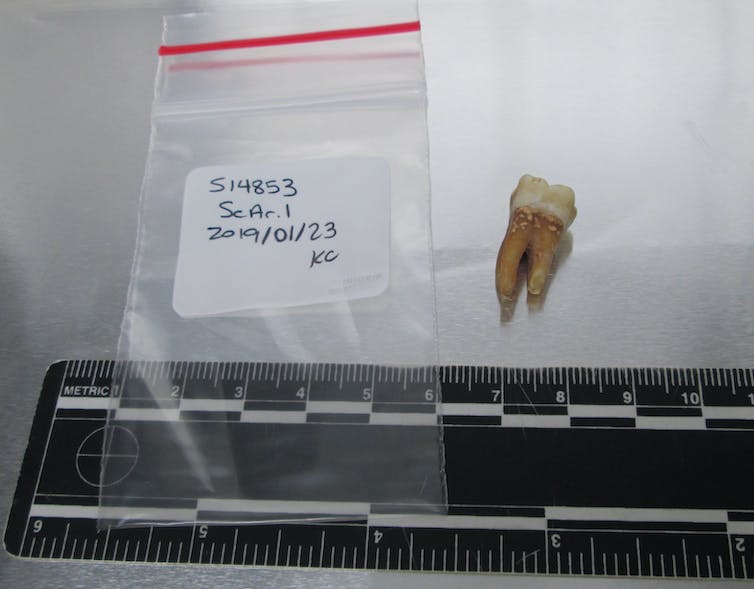 Image: In accordance with rabbinical ruling, researchers collected DNA from teeth that were already loose in the remains of people who lived during the 1300s. David Reich/Harvard Medical School, CC BY-ND

Today’s population is a blend of past groups

We sequenced 33 individuals who lived in the 14th century. Among them were two families: a mother and two children, and a father, who had likely been killed by a sword blow to the head, and his daughter.

Our first question was: Do medieval Erfurt Jews and modern Ashkenazi Jews belong to the same genetic population? On average, yes. There has been almost no incorporation of genes from non-Jewish European populations over the last 600 years.

But the biggest surprise was that Erfurt Jews were noticeably more diverse than modern Ashkenazi Jews.

Some medieval individuals had greater Middle Eastern ancestry; they were genetically most similar to modern Ashkenazi Jews with origins in France and Germany.

Others had greater Eastern European ancestry, consistent with historical evidence that a number of people living in Erfurt between 1350 and 1400 had surnames indicating origins in the East, as well as Slavic given names.

The two groups – those with more Middle Eastern or more Slavic origins – also had distinct levels of oxygen isotopes in their teeth, indicating they used different water sources in childhood, and thus, at least one of the groups must have included migrants.

Nevertheless, individuals from both groups were buried side by side, suggesting no social segregation.

Erfurt was at the geographic boundary between the two medieval Jewish communities, and in the 14th century, it was likely a home to Jews belonging to both. This may explain our detection of two genetically distinguishable groups in one place.

Modern Ashkenazi Jews don’t show the medieval genetic heterogeneity. Instead, their genomes look like a nearly even mixture of the two Erfurt groups. Our genetic results fit with studies of names, dialects and religious rites, which suggest that the Western and Eastern groups eventually merged and formed a single Ashkenazi culture. 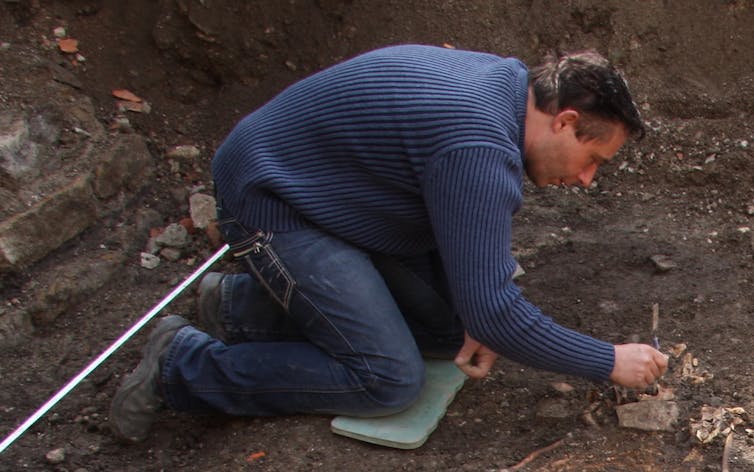 Image: In advance of construction, archaeologists carefully excavated medieval remains so they could be respectfully reburied in a 19th century cemetery. Thuringian State Office for Heritage Management and Archaeology/Ronny Krause, CC BY-ND

Our next question was whether Erfurt Jews show signs of the founder event so evident in the genes of modern Ashkenazi Jews.

They do. A stretch of genetic material called mitochondrial DNA is inherited only from mothers. Different people around the world today carry subtly different variations of it. One variant of mitochondrial DNA is found in 20% of modern Ashkenazi Jews and is nearly absent in non-Jewish populations. We identified it in 35% of the Erfurt individuals.

In other words, a third of the people we sampled from the graveyard descended, via their maternal line, from a single woman. That so many people share the same ancestral mother implies that the population must have been extremely small in the centuries before.

In the Erfurt individuals, we also found mutations common in Ashkenazi Jews today but extremely rare elsewhere, including 16 disease-causing mutations, one of them in the well-known BRCA1 gene. Another research group sequenced the genomes of six Ashkenazi Jews from 12th-century Norwich, England and identified other disease mutations that are also still seen in Ashkenazi genomes today.

What was most striking about the founder event was how strongly the Erfurt Jews were affected. We estimate that the degree of relatedness of modern Ashkenazi Jewish genomes to each other is about what would be expected if they descended from a population that had been persistently small throughout the second half of the Middle Ages. How small? We calculated that a core of only 1,000-2,000 reproducing people during this time would be responsible for most descendants today.

When we repeated a similar calculation using the Erfurt data, we encountered a surprise. Based on the medieval DNA, our estimate of the size of the founding population was about 3-fold smaller, only around 500 people.

How could it be that we were detecting the same founder event – responsible for the same disease-causing mutations in the Erfurt and in the modern Ashkenazi Jewish communities – and yet its impact on the Erfurt Jews was larger?

To address that, we proposed there were additional medieval Ashkenazi communities that inherited much less DNA from the core group of reproducing people we identified for Erfurt. We don’t yet know who these communities were, but our modeling suggests that they must have existed and later mixed with Erfurt-like communities, averaging together to form today’s Ashkenazi Jews.

So sometime after the 14th century, genetic barriers between Ashkenazi Jewish communities must have broken down, and the archipelago of scattered early Ashkenazi Jewish populations collapsed into the homogeneous group seen today. This was accompanied by extremely rapid population growth, which then continued for centuries. The Ashkenazi Jewish community, which had originally been demographically peripheral in the Jewish world, with its center of gravity around the Mediterranean and the Middle East, eventually became the largest world population of Jews.

A template for future studies

Erfurt and Norwich are just two locations. A richer picture of medieval Ashkenazi Jewish history will require sampling additional sites. How Ashkenazi Jews relate to Sephardi Jews and the many other living Jewish communities, and how all of these communities relate to Roman-period Judeans, are mysteries that ancient DNA research may also one day address. Any such research would need to take into account modern community sensitivities, and we think our work in Erfurt is a good model. 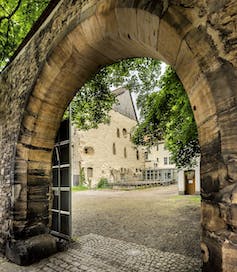 More broadly, this work provides a template for how ancient DNA, even from individuals who lived relatively recently, can reveal aspects of history that are otherwise invisible. By carrying out such studies, scholars can help reveal the roots of modern groups, enriching people’s understanding of themselves and each other.