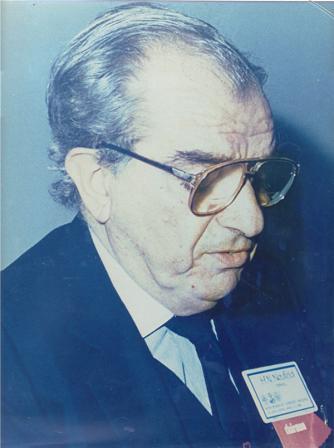 Professor Henry Neufeld served continuously on the BSF Board of Governors from its charter meeting in 1973 until his passing in December 1986.  During this period, he was elected chairman of the board three times.  Professor Neufeld made notable contributions to the growth and development of the BSF.  He was especially concerned with the need for young Israeli scientists to establish themselves and with the need to develop interdisciplinary research at the cutting edge of science.

Professor Neufeld was a prominent cardiologist and internationally recognized scholar. His research and teaching interests included cardiology, epidemiology, genetics, and biomedical engineering.  He served as chief scientist of the Israel Ministry of Health and was the founder and director of the Cardiac Clinic at Sheba Hospital in Tel Hashomer.

To honor Professor Neufeld’s memory, the BSF established in 1987 the Neufeld Memorial Research Award to be given to the most outstanding and original new project in the health sciences.

The Award – The Neufeld Memorial Award consists of a grant of $20,000.

Eligibility – Recipients of newly funded projects in the health sciences are eligible candidates. The award will be made to an investigator whose project is considered to be outstanding and original.

Application – No special applications need be made.  Every new BSF grant recipient in the health sciences automatically becomes a candidate for the award.

Selection – Candidates will be selected by BSF officers and the successful candidate will be approved by the Board of Governors.

Terms of the Award – The Neufeld Memorial Awards are given in addition to the investigators’ regular BSF grants.  The funds may be used by recipients to further their research in any way they choose – subject to the approval of the BSF – at any time during the period of their BSF grants.