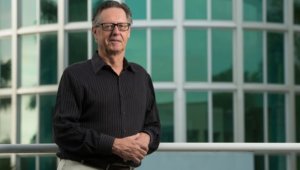 Following an extensive search, the US-Israel Binational Science Foundation (BSF) proudly announces the appointment of Prof. Anton F. Post as its new Executive Director. Beginning in October, Post will replace the retiring Dr. Yair Rotstein, who has led the BSF for the past 16 years.

When Post says that his new position is a “natural fit,” it is easy to understand why. After all, he has received four BSF grants, and as a former Program Director at the (United States) National Science Foundation (NSF) he worked closely with Rotstein in establishing the Ocean Sciences component of BSF’s hugely successful partnership with the NSF. He also started his 20-year career as a postdoc at the Hebrew University of Jerusalem, where he eventually became a professor in marine sciences.

Though his new role at BSF is still officially a few weeks away, Post has spent the past several months working closely with Rotstein to ensure a smooth transition. He says he has “big shoes to fill,” and praises Rotstein for his successful efforts to promote partnerships between scientists in Israel and the United States.

Post’s goals for BSF include building on those traditions of funding and collaborations between the US and Israel, expanding the NSF-BSF partnership even further, and using the NSF-BSF model as a basis for possible future partnerships with other major US organizations, such as the National Institutes of Health. He also wants to expand awareness of BSF in the United States.

He admits he is “more comfortable working in the background, for the good of everybody.” At the same time, he looks forward to taking on a more public role, particularly when it comes to promoting the value of Israel-United States science partnerships. Though he was born and raised in Holland, he considers Israel and the United States his “two adopted countries.”

“I am very excited about the prospect of being of service to Israel and the United States,” he said.

Post comes to BSF with an impressive list of achievements. A respected and well-published scholar in marine sciences, Post recently served as the Associate Vice President for Global Partnerships at Florida Atlantic University (FAU). Previously, he was the Executive Director of FAU’s Harbor Branch Oceanographic Institute and of the Coastal Resources Center at the University of Rhode Island.

While he was at Hebrew University, he pioneered the field of molecular ecology, straddling the disciplines of the Life Sciences, Biogeochemistry, and Marine Microbiology. He took on leadership roles as a member of the Board of Directors of the Eilat Marine Laboratory and as Director of the Moshe Shilo Minerva Center for Marine Biogeochemistry.

Post was born and raised near Amsterdam, and holds a Ph.D. in Microbiology, an MSc in Microbial Ecology, and a BSc degree in Biology from the University of Amsterdam. When he came to Hebrew University, he was immediately impressed with Israel’s approach to science.

“In Europe, science is driven by philosophy, but in Israel, as well as in the United States, science is much more hypothesis-driven,” he said.

Post received the first of his four BSF grants when he was at Hebrew University, and he credits BSF for playing a vital role in launching his research career.

“I have continued collaborating with several of the partners I have worked with on BSF-funded projects, and I am very grateful for that,” he said.

As for his interest in the life aquatic, Post said he has always been fascinated by water. “When you’re a Dutchman, you’re born and raised next to water, so exploring the aquatic environment was a very natural choice,” he said.

As a young researcher, he studied photosynthesis in cyanobacteria (blue green algae). These organisms are the source of oxygen that made our planet inhabitable billions of years ago. He directed his research toward marine cyanobacteria and used them as model organisms in pioneering the field of molecular ecology.

“Much of my research over the years has focused on how we can employ genetics as diagnostic tools for identifying nutrient stress in marine cyanobacteria and to understand what limits their photosynthetic capacity,” he said.

Post has always been fascinated by how much ocean science has changed since the 1960s and 70s. “Marine microbiology and molecular ecology became a central theme in ocean science as we started to understand that the ocean is anything but the ‘blue desert’ we thought of in the 60s and 70s,” he said. “In fact, most of the carbon and nutrient cycling in the ocean is taken care of by microbes. Thus, we had to get a better understanding of how these microbes thrive in ocean environments and how they contribute to ecosystem health on a global scale.”

Post is well-published, with more than 120 peer-reviewed publications, and he has been the recipient of several fellowships and awards, including being named visiting scholar at the Massachusetts Institute of Technology and earning the Gruss-Lipper Fellowship at the Marine Biology Laboratory in Woods Hole, Mass. In leadership positions at U.S. state universities, he oversaw multi-million-dollar budgets, comprised mainly of competitively awarded research grants.

Even when he is not in science mode, water factors into one of Post’s favorite hobbies – long walks on the beach. “I used to enjoy running, but eventually there was too much wear and tear on my knees,” he said.

He also plays guitar. “I was trained in classical guitar, but among my friends, I’m known for my blues and rock sounds,” he said with a slight grin. “They call it the Dutch Touch.”

Growing up in the Netherlands, he recalls a passion for archeology and languages. “My highest grades, though, were in biology and physics, so I decided to go where my grades led me,” he said.

Post’s wife, Osnat Post-Arnan, is Israeli. They have three children and three grandchildren. With this new chapter, they will resume residence in their home in Jerusalem.

“I am very much looking forward to working with BSF and doing what I can to create more opportunities for Israeli and American scientists to work together,” he said.